The Numerous service has been shut down. The website has been mothballed. The EC2 instances have been terminated. The data has been deleted. The remaining cash has been divvied up among the seed investors. The checks have been mailed out. The corporation has been dissolved.

Now, back to the lab.

Numerous Shutting Down on May 1

Today I have some bad news. Despite our best efforts, we’ve been unable to find a source of funding that will allow us to continue to operate Numerous. The service will be shutting down on May 1.

Colin, John, and I want to express our sincere appreciation for the support our more than 150,000 registered users and our valued partners have shown us. We believe we’ve created something with the potential to be profoundly important. We’ve been featured multiple times by Apple and have built a loyal following. That said, we have ultimately failed to put together the right combination of product, market, and message.

We’re of course extremely disappointed, but are at the same time proud of what we’ve built and what has been built on top of it. We know that thousands of users around the world—including the three of us!—will miss having Numerous available. Ultimately though we were unable to build a large enough user base to become self-sustaining.

Over the coming weeks we’ll be posting some additional thoughts about what we and our platform partners have built. In the mean time, let me just say thank you.

If you have any questions, please let us know.

Next week we’ll be shutting down the Account Balances channel, which lets you track account balances and transactions from thousands of banks, credit cards, and credit unions.

Since its launch last October the channel has proven very popular with our users, but increasingly stringent compliance documentation requirements from our upstream data provider have made it more and more difficult to justify providing this as a free service.

Unfortunately we’ve reached the point where’s it no longer feasible. Numbers created with the Account Balances will stop updating next Wednesday, February 3, 2016.

Please let us know if you have any questions in the comments below or by emailing us at support@numerousapp.com. Thanks!

The following is a guest post from Brent Schiffman from ProjectManager.com:

There’s a ton of important numbers in your life that you need to track that Numerous already helps with. Well, now you can track important numbers from work. Your deadlines will never be a mystery. When a task is created in ProjectManager.com, it updates your number.

Step 2: Go to “Make a Zap” in the navigation bar on Zapier.

Step 3: Match the trigger settings to the ones seen below:

Step 6: (optional) Set filters so that, not all tasks update your number. You can add “and” or “or” conditional filters as well.

Step 7: Match up ProjectManager.com and Numerous:

Step 9: Name and turn on your Zap. Make sure that you do this or the integration will not work:

Introducing the Next Public Holiday Channel

Using our free and open channel developer program, our friends at Limited Securities have created yet another great Numerous channel: Next Public Holiday.

The Next Public Holiday channel puts a countdown in your Numerous dashboard that always counts down to the next public holiday in your country.

So if you live in the US, you’ll see this:

But if you live in Israel you’ll see this:

And since you can add countdowns for countries other than your own, this might come in handy if you have friends, family, or coworkers living in a different country.

The Next Public Holiday channel is available today for iOS and Android. Check it out!

Today we're excited to announce two new channels: Movies and TV Shows. Whether you're a movie buff or an expert Netflix binge-watcher, we've got you covered.

It's movie night! With the new Movies Channel, you can search for upcoming movies and join other Numerous users in counting down to the most anticipated movies of the year.

What movies are you looking forward to? Here are a few we're particularly excited about:

Are you a fan of Doctor Who, The Big Bang Theory, Homeland, or Game of Thrones? If your favorite show is on the air or scheduled to air soon, Numerous will let you count down to the next episode of your favorite television series.

Here are a few of our personal favorites:

Getting Started with TV Shows & Movies

We'll be over here impatiently awaiting the release of the next Star Wars movie.

With the US Presidential Election channel you can track:

That’s it! These great numbers from the election are now available at a glance on your phone, tablet, or Apple Watch. And be sure to turn on notifications so you’ll know the instant a new poll comes out or a candidate’s fundraising progress changes.

The US Presidential Election channel is a fun and effective way to stay on top of the election. We hope you’ll follow along with us all the way to the White House.

Meet Numerous v3.1 for iOS. The app that tracks the most important numbers in your life just got even better with new features, iOS 9 support, and new channels. Let’s take a tour of what’s new. 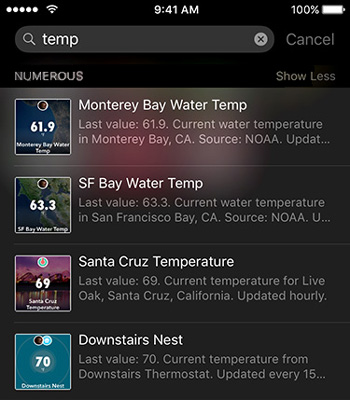 While many Numerous users keep only 5-10 numbers on their dashboard, some just can’t help themselves. Lots have more than 40 and one user even has 400. (In case you were wondering, I have 91.) Now with our integration with Spotlight in iOS 9, finding a needle in the haystack is a snap. Numerous keeps the Spotlight index updated with all of your numbers and their latest values. If you tap on a number in Spotlight, Numerous launches, moves to the corresponding page, and opens a detail view for that number. 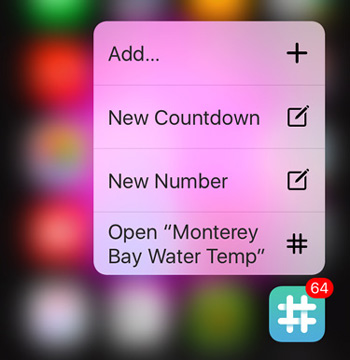 iPhone 6s and 6s Plus owners can now 3D press the Numerous app on the home screen to access a shortcut menu of common actions. If you’re using a number to badge the Numerous app icon (a very handy feature), you can open it directly from the shortcut menu. You can also create a new number, a new countdown, or go straight to the add screen.

While previously a link to a Numerous number, channel, or user profile would first open in Safari, then prompt to open the Numerous app, then finally switch to the app, those links now go directly to the Numerous app. It’s a small thing, but the time savings can really add up. 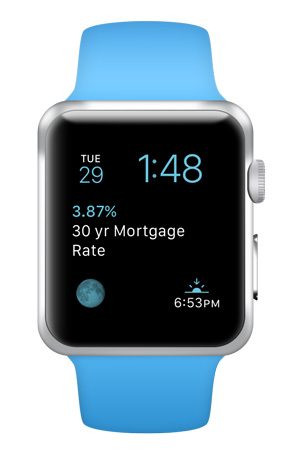 Numerous is now a native Apple Watch app! That means that it runs on the watch and not on the phone so it opens faster and can run and update your numbers even when the iPhone isn’t nearby.

When Apple first announced the Apple Watch we couldn’t wait for the ability to put Numerous numbers right on the watch face, and now that time is here. Pick any of your numbers to show as a complication and they become truly glanceable, updating immediately without having to open the app.

With the Account Balances channel you can track account balances and transactions from thousands of banks, credit cards, and credit unions throughout the United States and Canada. 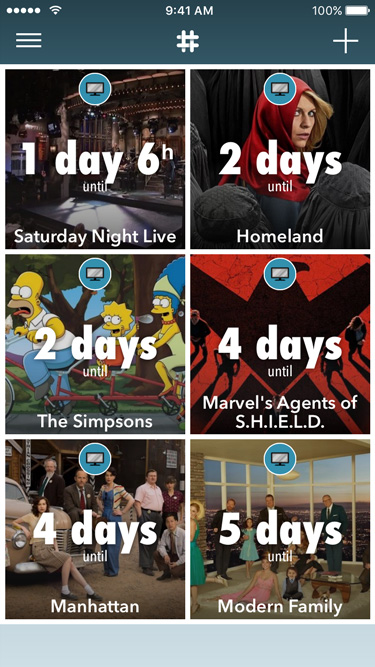 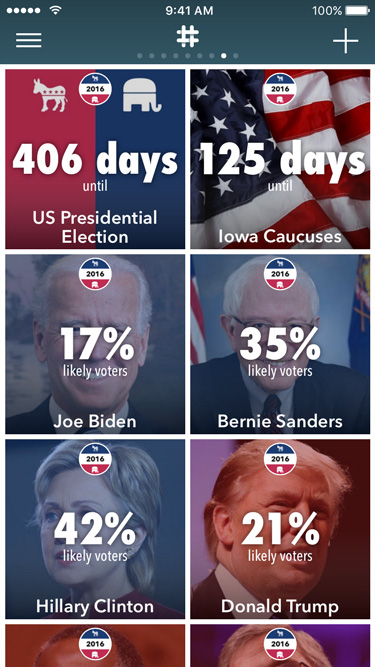 With the US Presidential Election channel you can track and graph current poll standings for every major candidate as well as add countdowns to important upcoming events such as primaries and the general election.

Another great channel from our friends at Limited Securities, the Klout channel tracks your “Klout Score”, a rank of your social media influence. 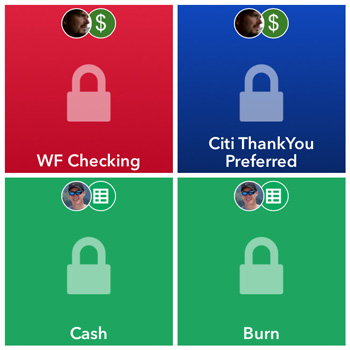 It’s always kind of fun to show off my Numerous dashboards to friends and fellow Numerous users. But some numbers, like, say, my checking account balance, are more personal than others. To help keep those numbers private, we’ve added the ability to "lock" a number so that it’s only visible with Touch ID or a PIN. Unlocking the number makes it visible and accessible until you leave the app or switch to another page of numbers.

Previously Numerous would show metric units (celsius, km, kg, etc) if your device was set to a region that officially uses the metric system, and imperial units (fahrenheit, miles, pounds, etc) otherwise. But that didn’t work for everyone. For example, Canada is officially metric but many Canadians prefer imperial units. With this update, you can choose which units to use for temperature, distance, and weight regardless of the region set in iOS settings.

Ready to try out all these great features? Head on over to the Apple App Store and update.

A Video Introduction to Numerous

It's been ages since we published the last video introduction to Numerous and we've made tons of improvements since then. So we decided to make a new one. It's only five minutes long and barely scratches the surface of what Numerous can do, but for the uninitiated it gives a good overview.

Of course the danger in doing this is that we'll come out with even more great improvements as soon as the video goes live. Which is exactly our plan! Bwahaha! Stay tuned. :)

If you're lucky enough to be in Austin the next couple of weekends for ACL, some of your most important numbers will be the time until your favorite artists are performing. So we've added a new ACL Music Festival channel to Numerous with countdowns for the biggest headliners at the show!

The best way to always know what's going on at ACL is to download Numerous now, explore the ACL Music Festival channel, and get ready for two weekends of great music. Here are some of the numbers you'll be find in the channel. Once you're following them in the app you'll be able to set custom notifications and chat with other people about the shows.

Personally, I'm a huge Foo Fighters fan and can't wait to see them perform live again. Dave Grohl is a hero to every creative person who's had to start again—which is to say all of us. Rock on, Dave! :)